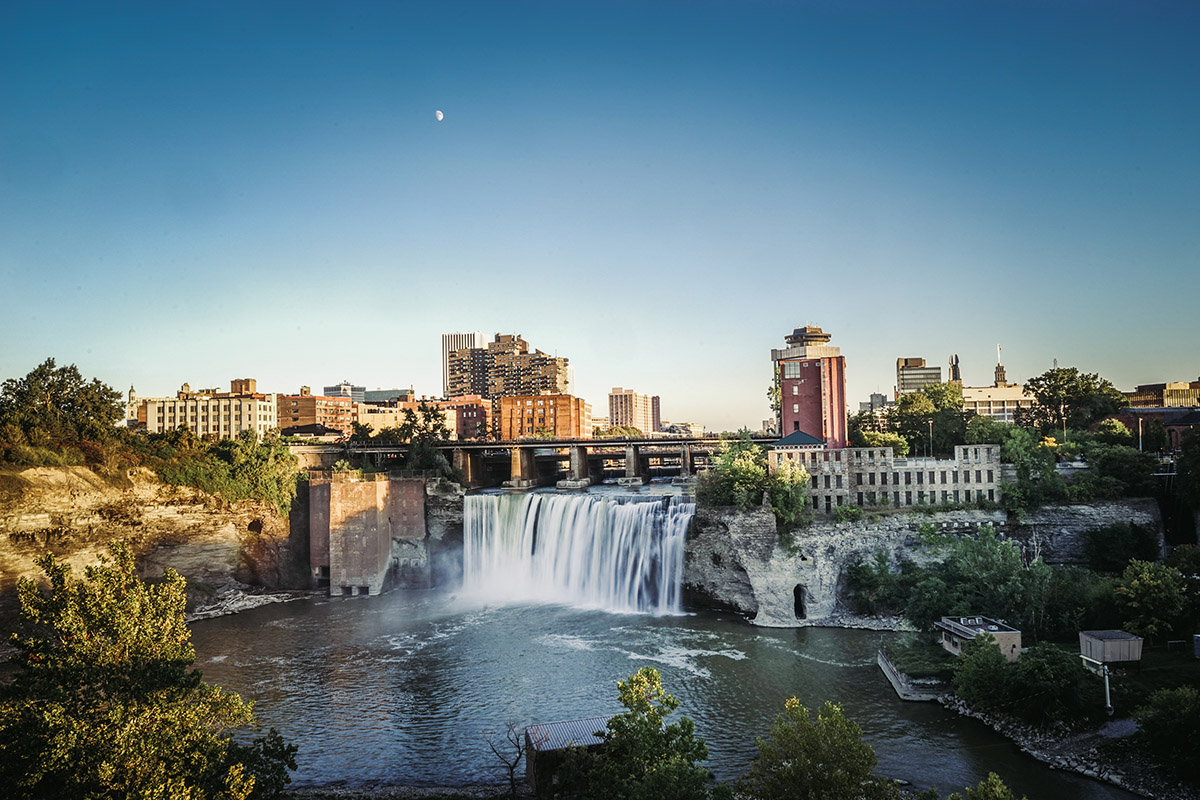 As printed and published in Rochester: A Panoramic History, by Blake McKelvey and Ruth Rosenberg-Naparsteck, Chapter 13, “Chronicles of Leadership”

Louis J. Gallo had been practicing law as a sole practitioner for thirteen years when Frank B. Iacovangelo met him shortly after graduating from law school in 1965. “We formed an association,” says Frank. “We shared office space and helped each other out on cases. It worked so well that we formalized the relationship in 1971 and became partners.” Frank’s brother, Bernard, joined the partnership a few years later, and together they built the foundation of what has become a true Rochester, New York success story.

Throughout the next two decades, the Gallo & Iacovangelo law firm developed a concentration in corporate investments as well as residential and commercial property transactions. Particularly with Frank and Bernard’s growing personal experience in real property investment and development, the firm became generally regarded as one of the preeminent sources of real property law expertise in the Rochester community.

Michael J. Ringrose joined the firm as an associate in 1986 and became a partner in 1992. Mike now heads the firm’s Residential Real Estate Department, and he has overseen thousands of transactions assisting clients in buying and selling their homes. Mike developed at an early age a profound respect for the law and a keen understanding of the hard work necessary to be a successful lawyer. His father was a practicing attorney and is now the Oneida County Surrogate’s Court Judge, and his grandfather served as a Judge of both the Surrogate’s Court and the State Supreme Court. With a degree in accounting, Mike is uniquely qualified to counsel clients in business transactions and real estate matters, as well as in drafting wills and general estate planning.

Mark Hollenbeck also became a partner in 1992, and now heads the Mortgage Lending Department. “The coordination of mortgage closings has become more and more demanding as our lender clients have expanded to regional and national levels,” says Hollenbeck. “We are committed to sound customer relations with a personal touch despite regionalization.”

Frank Iacovangelo credits Louis Gallo with the firm’s philosophy concerning client service. “Lou Gallo treated each client like they were his only client, with a singular focus on their needs and interests. It was the way he lived, the way he practiced law, the way he did business,” recalls Frank. Louis Gallo, meanwhile, says that Frank was the moving force behind the growth and success of the firm. “Frank had the vision for building a firm with attorneys who would specialize in areas of practice. He had unbridled energy and he wasn’t afraid to take the chances you have to take to build a law firm.”

Those two founding philosophies have served the firm and our community well. The attorneys of Gallo & Iacovangelo, LLP have adhered to the values of the founding partners despite the fact that the firm has grown from a two-attorney partnership to the eleventh largest law firm in Rochester, New York. As the firm developed through the 1980s and into the 1990s, the need to broaden its areas of concentration became more and more critical. “With the number of clients we had coming through our doors for real estate transactions and general business advice we naturally became a more full-service law firm,” says Frank. “Our clients needed us more often for wills, estate planning and administration, for family law matters, and most particularly, to represent their interests in litigation.”

In 1995, the firm recruited Joseph B. Rizzo, a local product who had been litigating cases in the New York City area, to further develop and manage the firm’s Litigation Department. “I was intent upon moving back to Rochester, and the firm needed litigation support,” says Joe. “We had a natural fit.” Joe immediately expanded Gallo & Iacovangelo, LLP’s expertise in personal injury litigation, and in a few short years had obtained millions of dollars in recoveries for the firm’s injured clients.

In addition, Joe brought significant experience in insurance and municipal law matters, and defending municipal entities in the Rochester community quickly became a primary concentration of the firm’s Litigation Department. The firm’s clients include counties, cities, towns and villages, as well as public authorities, school districts and other special districts, offering full-service representation in whatever capacity required. Gallo & Iacovangelo, LLP has also become known as one of the most effective law firms in the upstate New York region in the defense of police liability claims. In 1999, David D. Spoto joined the firm and has since become a partner. Dave had previously served as an Assistant District Attorney for Monroe County, and his skills in the area of criminal law translated well into the defense of police and police agencies. “Gallo & Iacovangelo, LLP is an ardent supporter of our local police departments and it is our distinct privilege to advocate on behalf of law enforcement clients,” says Spoto.

Of note, Joe Rizzo’s father had attended school with Frank and Bernard Iacovangelo at Aquinas and St. John Fisher, and Joe becoming a member of the partnership really marked the beginning of a new generation of young attorneys at the firm. In fact, Frank’s son, Anthony B. Iacovangelo, and Lou Gallo’s daughter, Sandra G. Wilmot, were soon to become partners and key members of the firm’s real estate department, reaffirming the sense of family that the firm was built upon and remains dedicated to. Anthony and Sandra are instrumental in continuing the levels of service, dedication and passion which our community has come to expect from Gallo & Iacovangelo, LLP’s real estate practitioners. “In a way, Gallo & Iacovangelo has always been a family business,” Frank reflects, “and I try to mentor our young attorneys like I would my own family.”

“Frank has taught me so much about the practice of law,” says Joe Rizzo. “When I arrived from Manhattan, I had already litigated some major cases and I considered myself to be a pretty sound legal technician. But Frank focused my attention on the business of law and on how to truly communicate with my clients.” Mike Ringrose echoes these sentiments. “Frank took me under his wing from day one,” he says, “preparing me for the day when I might be needed as a manager.”

Indeed, as of October 1, 2001, Michael J. Ringrose was elected as only the second Managing Partner in the firm’s history, and Frank Iacovangelo, for one, couldn’t be more pleased. “My time to run the business of the firm is coming to an end,” muses Frank. “It’s time for Mike and the younger attorneys to drive the firm into the future, and I’m very confident that the future management of Gallo & Iacovangelo is in capable hands.” Frank’s time and efforts these days are dedicated to a thriving legal practice, as well as to his duties as the Public Administrator in and for Monroe County, a position to which he was appointed in January, 2000 by Monroe County Surrogate Edmund A. Calvaruso  and re-appointed in 2015 by Surrogate John M. Owens.

Together, the attorneys of Gallo & Iacovangelo, LLP look forward to their continued growth and success into the new century, and to perpetuating the values upon which the firm was founded in dedicated service to the people of the Greater Rochester, New York area and beyond.

Ask our attorneys, we can help.